Maria pieced this fabulous top.  I love all the movement in it.  Both the fabrics are blue batiks.
It's 75 x 75. 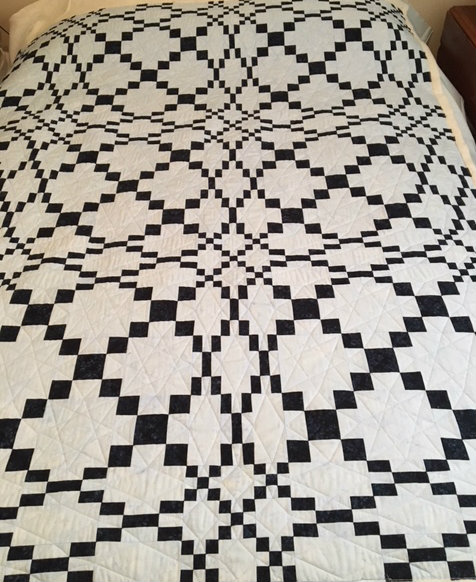 I did all ruler work - creating secondary designs: 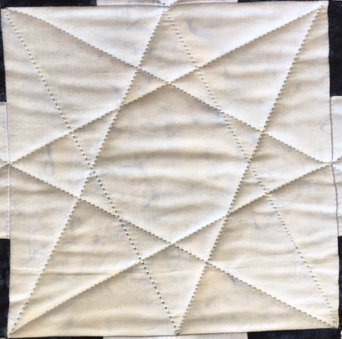 some of the quilting lines created stars, while others are diamonds or stars: 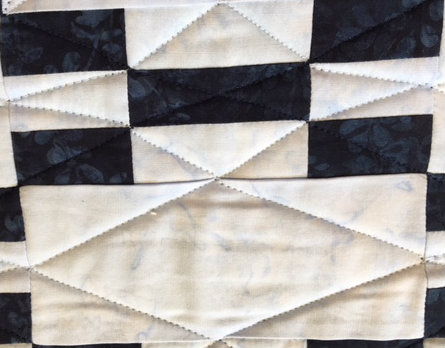 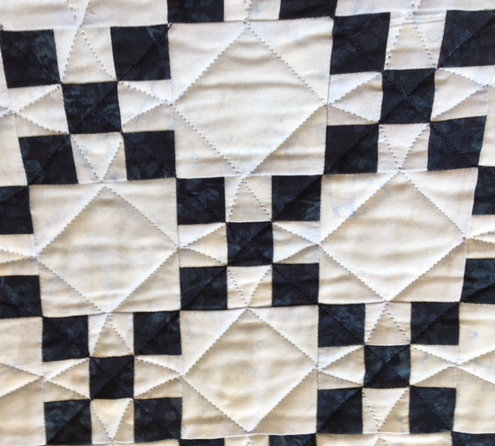 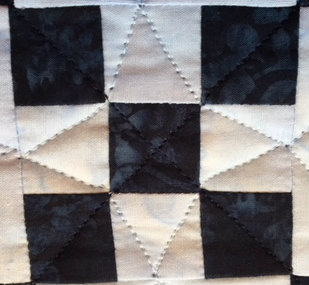 The backing is the same light blue, so all of the quilting shows well.

I did a simple cross-hatching in the darker blue areas 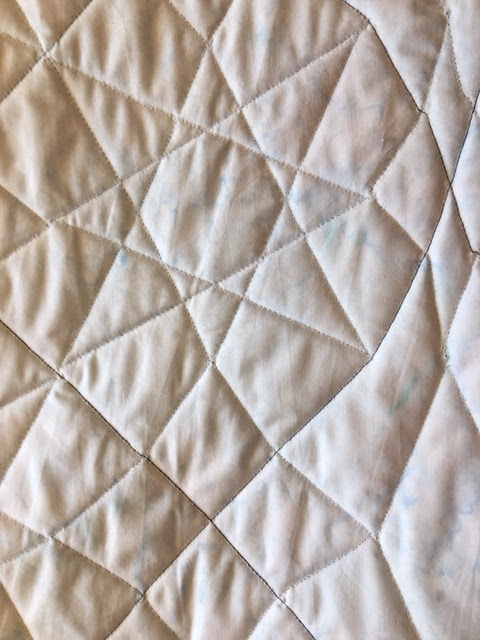 A guild in Niceville, FL made this Quilt of Valor and it was sent to me for quilting.  It's 60 x 70.  I used a light tan thread on all the stars, and white in the sashings.  I used connecting curves in most of the block, with an 8-pointed star in the center.  The sashings have straight lines, and the border is a simple meander. 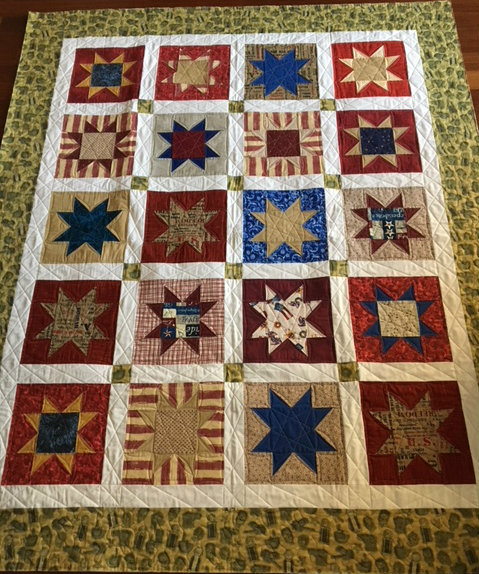 I love how all the stars are different combinations.
There is a white sashing throughout.  Some stars are pints, and others are solid on a print background. 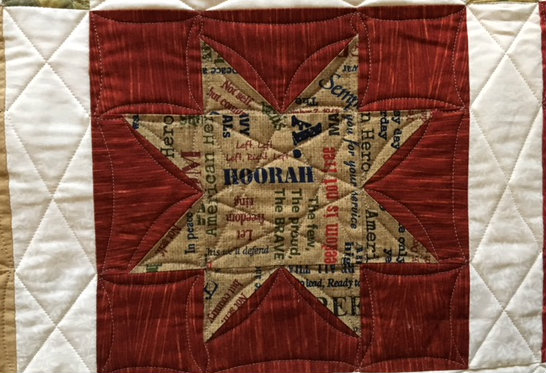 Some are all the same fabric - 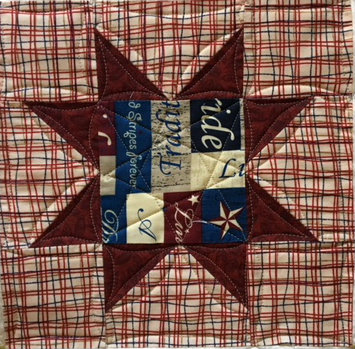 and some have a different center

There is a muted military print in the cornerstornes and border: 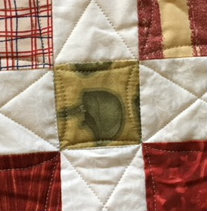 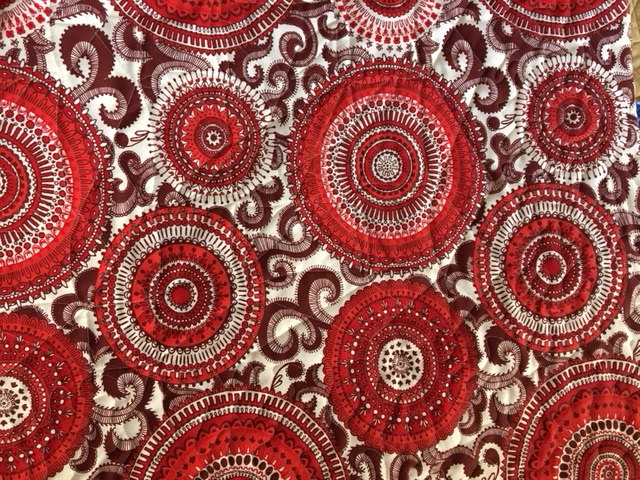 Deb made this top from her daughter's dance and ballet shirts.  She did a great job, and really went crazy with the peace sign fabrics...   It's 50x65.    I used a variegated thread to blend with all the colors, and just did a simple meander since nothing fancy would show. 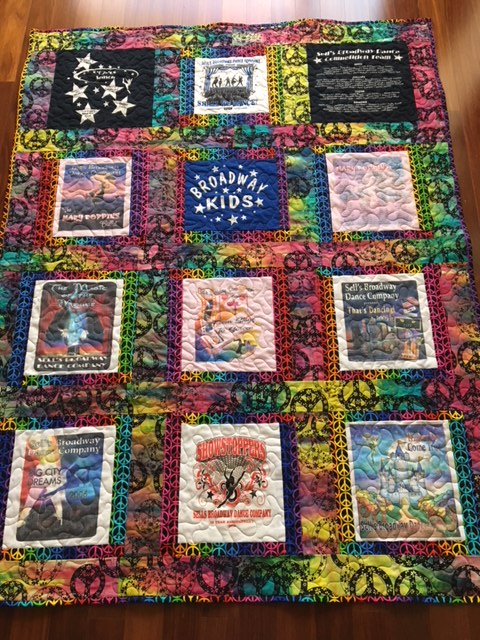 She wanted the back folded to the front for the binding:

the backing is the same fabric used to border the shirts on the front: 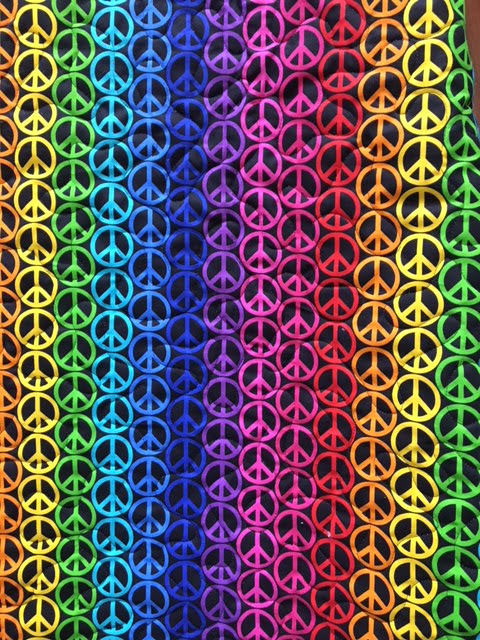 Ruthie made this QUILT OF VALOR for a family friend.  I love the big heart that the log cabin blocks created.  It's 66x72.  I've applied the binding for her to stitch down. 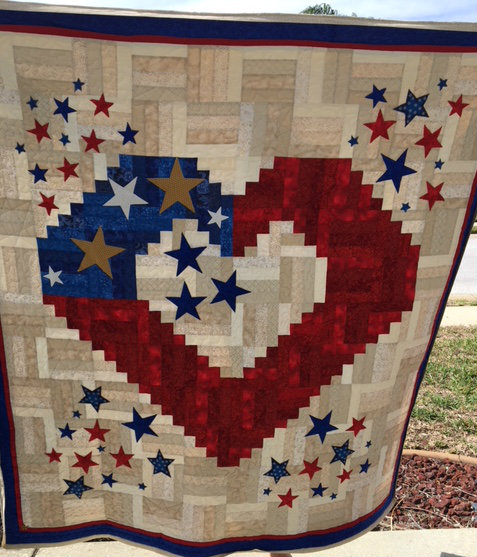 
I quilted a simple meander in the background, with an 8-pointed star randomly placed.  I outlined each star to make them pop a little more.  The same quilting was done in the red and blue areas, with a wiggly line in the border: 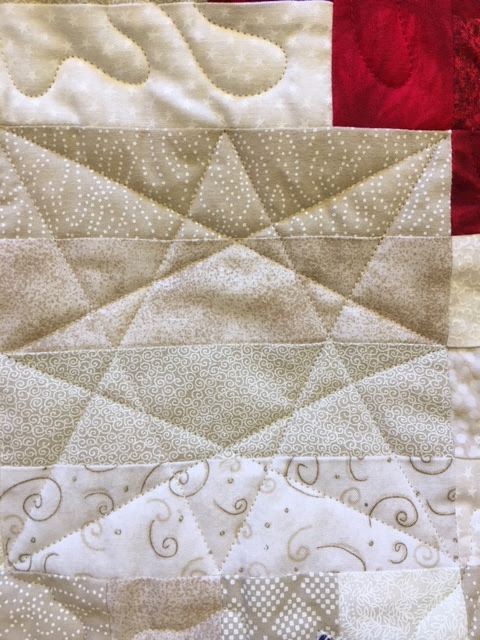 8-pointed star in the background 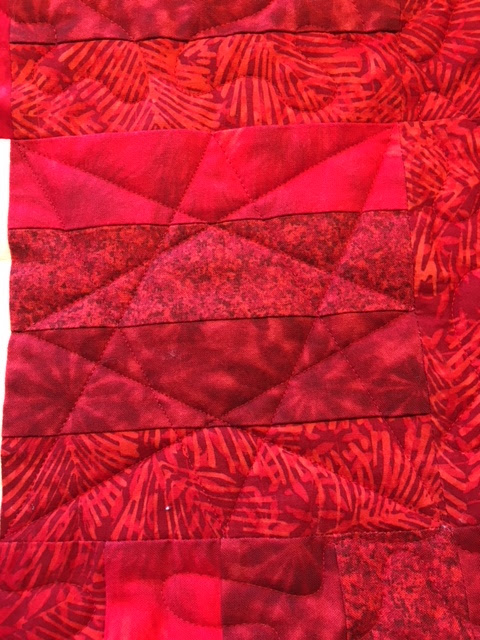 8-pointed star in the red area 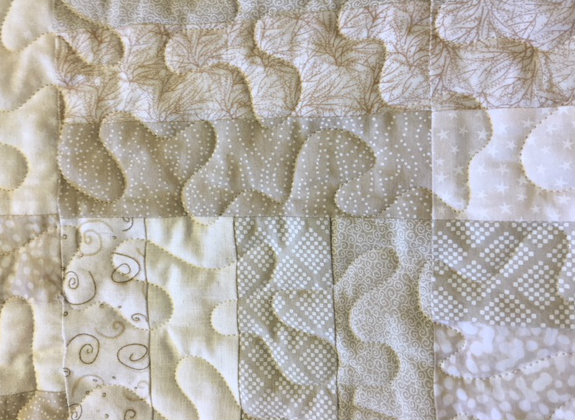 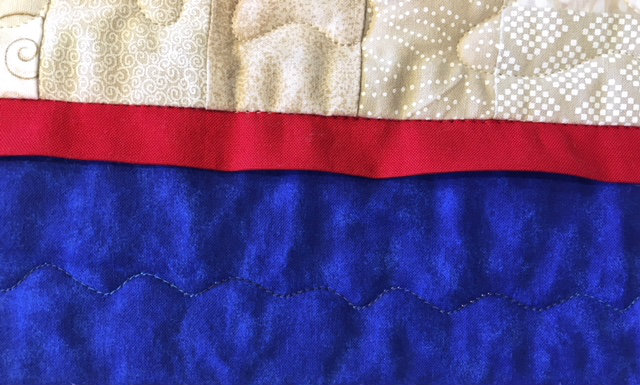 A red flange was added to help frame the quilt. 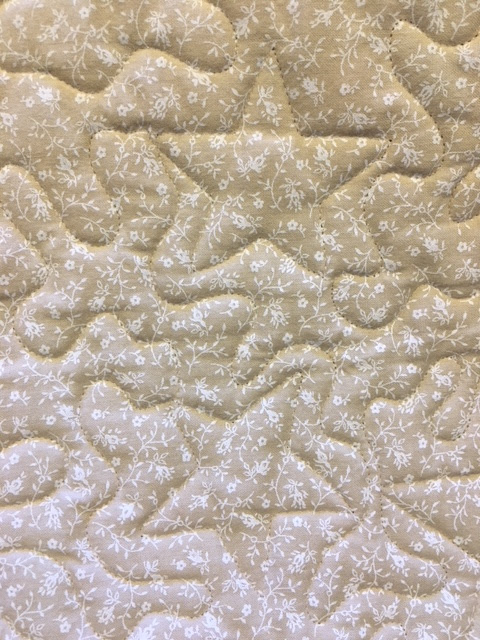 The backing is a beige tone-on-tone

My friend Ruthie made this Quilt of Valor for a friend.  She added the box around the center star to highlight it.  It has a purple heart in it since the veteran to receive it earned a Purple Heart.  It's
65 x 78.  I've added the binding and she will do the hand-stitching.  It's the same fabric as the backing. 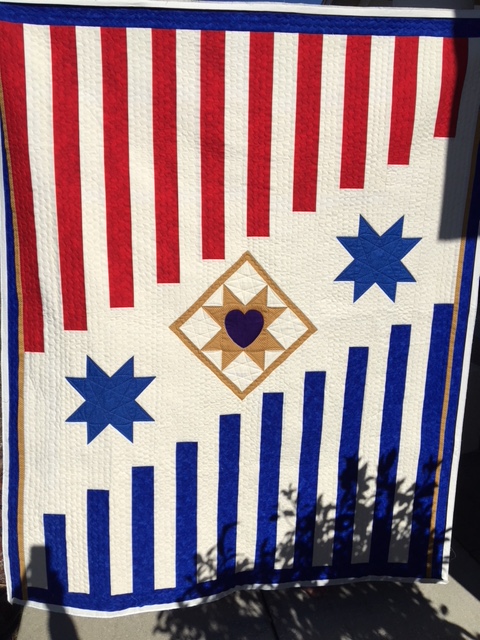 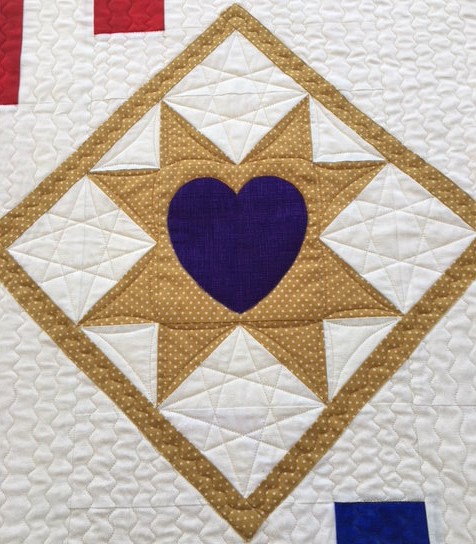 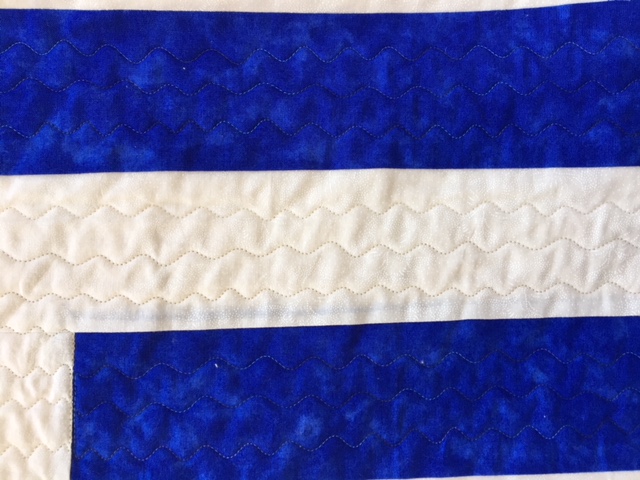 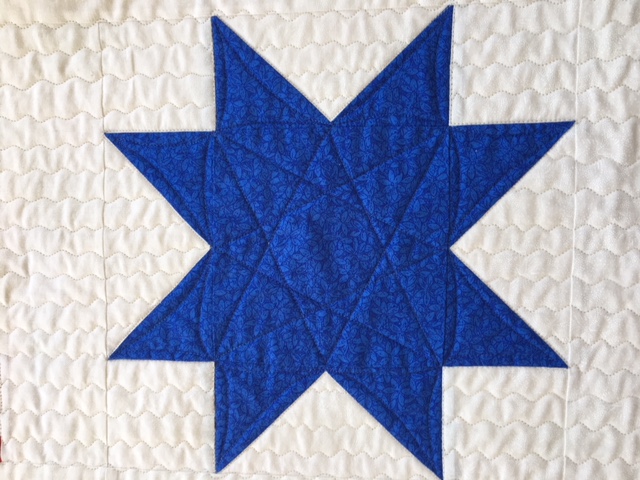 I quilted a star in the center of the blue stars, and connecting curves around the points of the star 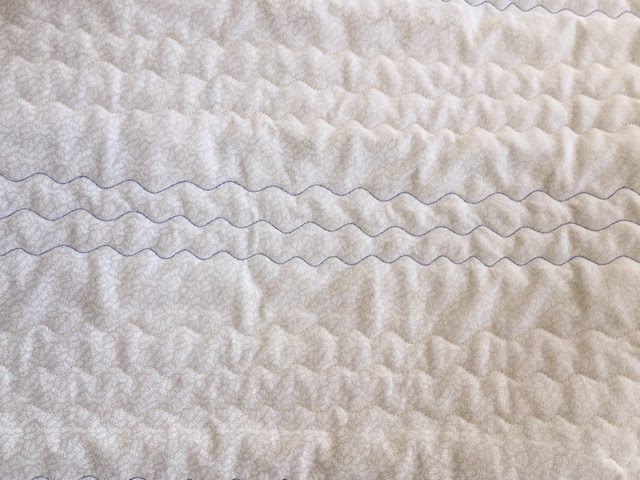 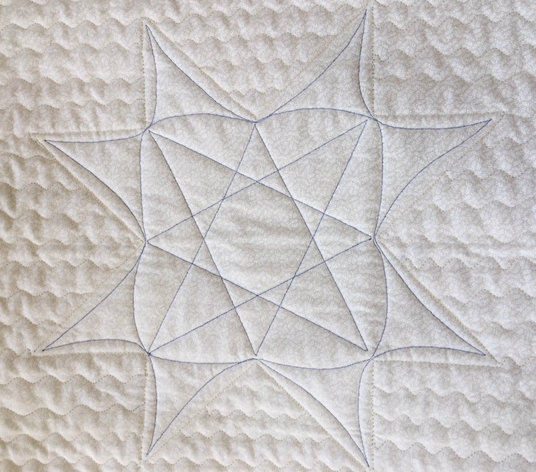 The quilting shows up well on the back

here is a photo of the recipient - a good friend of the piecer; 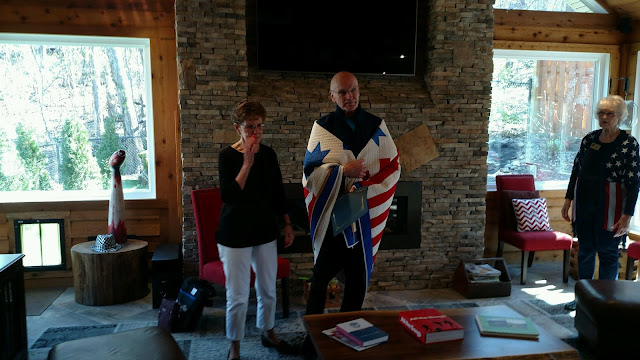